Impeccable manners, compliments and even a tripe stick... 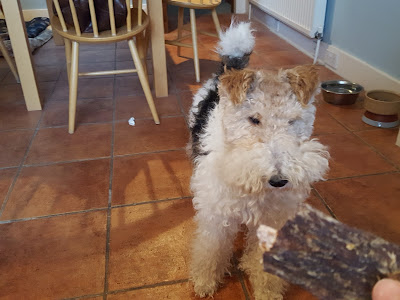 You know what? When Gail came home on Thursday evening from an all day meeting at the Aberdeen office of the French oil company Total, she gave me a big smile and an extra treat as well as the usual fond hug.

Yes I was surprised too, until Gail explained the backstory.

If you have been on a train at all in the last twenty years you will certainly have come across those irritating people who engage in long work-related conversations on their mobile phones, thus disturbing their fellow passengers whose only wish is to sit quietly and read. Well a week last Friday, during the journey to Nottingham, Gail became one of these annoying types. For the time it took us to travel between Darlington and Doncaster she was engaged in a conference call involving colleagues at Total in Aberdeen and at Danish company Dong in London. (Yes 'Dong' is a funny name isn't it!)

I was a wee bit insulted to learn later that she had felt it necessary to pre-warn the other call participants she would be on a train, with "a dog", and so things might not all go smoothly.

Well as you are aware, these days my train manners are impeccable and I snoozed quietly on Gail's lap for the duration of the call. We were past Newcastle so the hen parties had disembarked and the carriage was relatively quiet. Since Gail was mostly listening not talking, she hopes the other passengers were not too put out.

Anyway, this week's meeting at the Total office was an 'in person' one with the same chaps (it is still mostly chaps in her business) who had taken part in the earlier conference call. Apparently they all said how mightily impressed they were that Gail had managed to join in without any interruptions, and what a well-behaved dog I must be. 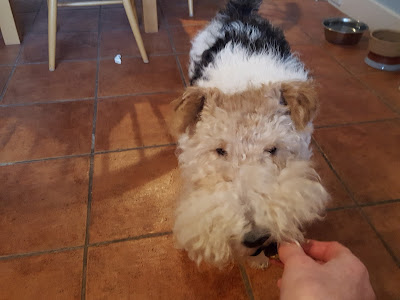 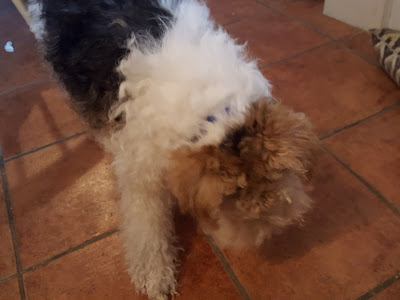