It's Murphy and Stanley's FFHT time again, and as usual the set phrase is highlighted in red … 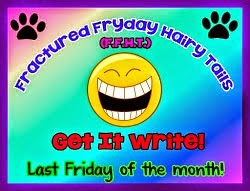 In a Flap about a Flag

As my regular readers will already know, mine is a mixed race household. Although I live in Scotland, Gail (my human carer) was born south of the border to English parents, and brought up in the fine city of Nottingham, and she still identifies herself as English. Whereas I am, of course, a proudly Scottish pup.

Tensions first arose in the summer of 2010 when I was just a few months old.  The football (that's ‘soccer’ to my US friends) World Cup was taking place in South Africa. England had qualified for the competition but Scotland sadly had not.

“So Bertie my young pup”, said Gail, “in the absence of your national team, I assume you will be cheering for England along with me. After all, they will be needing all the support they can get*. Look here, I have a flag for you to wear for the first game. I’m afraid this was the only one I could find in Aberdeen. It is rather large but I’m sure we can tastefully arrange it over your wiry wee frame.”

I reacted as any self-respecting Scot would to being draped in the flag of the Auld Enemy.

Unfortunately, the harder I tried to get it off me, the more ensnared in this dreadful piece of fabric I became.

I had all but strangled myself before Gail managed to dissociate me from the Cross of St George and was able to snatch a photo. 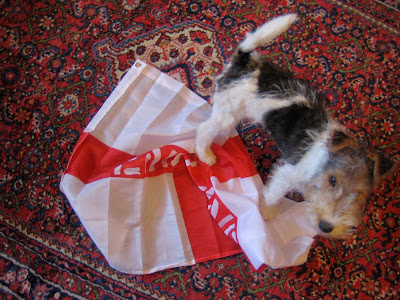 I am pleased to report that a certain England fan learned her lesson and has never again committed such an atrocity upon my person.


*This prediction proved to be accurate