A faux pas at the Vynor Dog Agility Show

Can you tell that I am feeling embarrassed here? 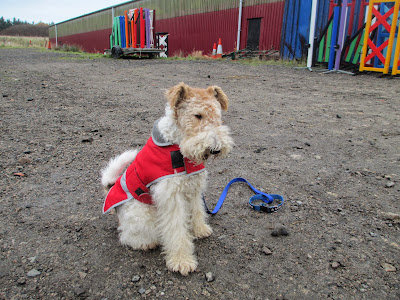 You want me to explain?

At agility contests, border collies predominate. You get a fair smattering of German shepherds, spaniels, Jack Russells and poodles.

We have never yet seen another wire haired fox terrier, but on Saturday, at a show near Ellon, we ran into this fellow in the car park, and Gail wondered about his origins. 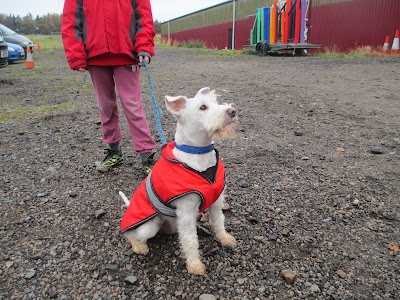 So the conversation between the humans went as follows:

Gail (thinking to be polite): Oh you have a lovely dog. What breed is he? Or is he a mixture perhaps. (Oh no….)
Other lady: He's a schnauzer (you could hear her mentally adding OBVIOUSLY).
Gail: Oh, so a very pale schnauzer then?
Other lady: (sounding as frosty as the weather) No, he's a white schnauzer.
Gail: How interesting, I didn't know schnauzers came in white. (Why not keep digging Gail?)
Other lady: Well, actually, white schnauzers are a very well known breed on the Continent, and increasingly so here. Actually, this one is has a seven generation pedigree, and he has been accepted into the World Championships. We are hoping that Crufts will soon be including white schnauzers as a breed, they really are widely recognized in most parts these days, actually….

At this point I decided it would be prudent to create a distraction so I started barking and tugging at the lead and Gail, gratefully I think, made her excuses and ended the 'conversation'.

I shall leave you with some images of the agility event, and also a very short video of the opening and closing moments of my final run. I would have preferred to include the much longer version of my entire performance, but Gail said that would be even more embarrassing than her encounter with the very pale white schnauzer owner.