The Anti-Placebo by Proxy Effect 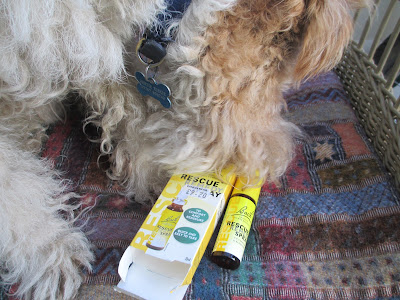 So last month at work Gail was discussing important matters with her animal-loving boss, and the subject of my, er, 'excitable' nature and 'issues' with train travel cropped up.

The boss - who does sound nice - recommended Bach's Rescue Remedy, which she had apparently found most effective in calming down her two horses when they were reluctant to enter their horse-box.

Rather to my surprise, Gail, normally a major league sceptic about so-called alternative medicine, actually went out and purchased said compound. She did then spend quite a time moaning about the astronomical cost of the teeny weeny spray bottle and was overheard saying "it had d*****d well better work".

Pups, have you ever had such an evil substance sprayed into your mouth? Can you believe I was subjected to this humiliating treatment on the station concourse before embarking on the 7:52 a.m. Aberdeen to Edinburgh train? With Gail totally stressed, going "open your mouth you little brat, hold your tongue still, I paid good money for this stuff, and I'll be most upset if you carry on barking on the train, ow-ee your teeth are sharp!"

Now I have no idea how Bach's Rescue Remedy is supposed to work on us dogs, given that it contains no scientifically proven mood altering substances. Wearing my Bertie Boffin hat I hypothesise that a 'placebo by proxy' effect may come into play. That is, if the human is all calm because he or she is confident that the medication will work, then the aura of serenity might I suppose be transmitted to the pup who is by nature sensitive to the mood of its owner.

Well it all went badly wrong with me.

I think we shall have to call what happened on the train last month the 'anti-placebo by proxy' effect. Let me explain how it works:

For starters, Gail was fractious and irritable because she already suspected she had just spent her hard-earned cash on a useless 'quack' remedy. I of course picked up on this anxiety, as well as objecting to the indignity of have some revolting smelling liquid sprayed into my mouth (in fact most of it went up my nose) in the embarrassingly public forum of a railway station, and anyway the whole situation rapidly entered a downwards spiral...

Personally I think Gail should take a bottle of single malt whisky for her own use on the train next time and all will be, or at least seem, fine.
Posted by WFT Nobby at 06:00