Surely I should have been Jeeves? 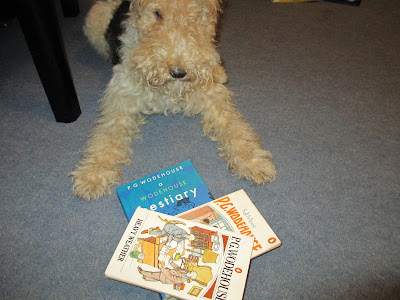 I guess most of you know that I was named after Bertie Wooster, the fictional character created by P.G.Wodehouse.

There comes a time in a chap's life when he starts to wonder if his name is really apt.

Gail says she chose it 'cos Bertie Wooster always makes her smile, and so do I. Furthermore, she claims that we two Berties have much in common, both being prone to getting into scrapes but never failing to bounce back, enthusiasm undimmed, all bright eyed and bushy tailed, ready for our next ill thought out adventure. Oh and that neither of us has a mean bone in his body.

Well I have been going into the subject in more depth and I can't help but feel Gail made a mistake with her somewhat superficial approach to name selection. Indeed I am quite upset to learn that this young Wooster is much given to alcoholic excess and short-lived engagements to unsuitable females. He has dodgy taste in clothing, an array of fearsome aunts and, worst of all, is described as possessing 'negligible mental powers'.

If only Gail had chosen to name me after a different and altogether more estimable inhabitant of Wodehouse's fictional England.

And no Gail, I am not thinking of Gussie Fink-Nottle, Bertie's Drones Club chum who keeps newts and has a face like a fish.

Nor am I thinking of Lord Emsworth, whose deepest emotional attachment is to his prize-winning pig.

That is so not funny.

We all know perfectly well I am talking about the masterful Jeeves, in theory Bertie's servant but without question a person of superior intellect, tact and subtly creative problem solving abilities.

Yes I think Jeeves would have been a quite splendid and fitting name.

Gail, please explain why are you laughing at me, again.
Posted by WFT Nobby at 06:00