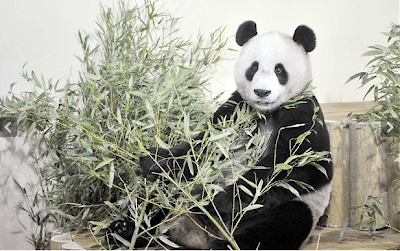 I don't know about you but I am fed up to the back teeth with all the gushing media coverage about the new arrivals at Edinburgh Zoo.

So giant pandas TianTian and Yang Guang, aka Sweetie and Sunshine, arrived here in Scotland on Sunday morning, all the way from Beijing on their own private jet, having apparently enjoyed inflight meals of bamboo, apples, carrots, a 'special panda cake' and mineral water. The zoo will be paying China the princely sum of a million dollars a year for the privilege of housing the pair. An enclosure specially built for the spoilt brats honoured guests has cost more than a flat in Edinburgh New Town.

What's the big deal about giant pandas anyway? Why do humans make such a fuss over them?

It can't be their sophisticated taste buds. (More bamboo, anyone?) They don't exactly have interesting sex lives. (Once a year, if Yang Guang's lucky, by all accounts.) And you can see eyes like that all over Glasgow any morning after an Old Firm game. (Gail says this last comment is in dubious taste, and reflects badly on Scotland.)

And no it is not that I, as a wire-haired fox terrier, am simply jealous of a rival species that beats even me in the 'looking like a cute toy' stakes. Nor that I envy TianTian and Yang Guang their £70,000 annual food budget.

It's just, oh I don't know, pandas don't do anything. They lead such boring lives. I mean, imagine a panda's blog.