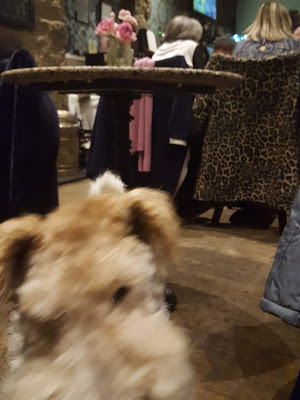 Gosh I am so excited to tell you about how I took part in my first ever Quiz Night at our local pub, the Inn at the Park, on Tuesday evening.

You won't be surprised to learn that I contributed massively to our team's winning score - mostly by means of my 'interactions' with team-mate Scruffy the Malteser and other dogs present - these distracted the humans and prevented them having time to 'over-think' the answers. 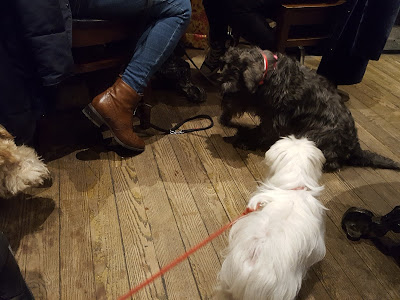 I'll admit it was a bit disappointing that, despite having two dogs on our team, we failed to answer correctly a question involving Ronnie Barker. And surely, the humans (Kirsty, Lupin, Iain and Gail) should have realised that the last UK Prime Minister to be born and raised in Scotland, prior to Gordon Brown, was Tony Blair, shouldn't they? I mean, Gail even met him once*. And who ever has heard of Sir Alec Douglas Home anyway?

Gail shocked me (and perhaps herself) by knowing that the always obnoxious Katie Hopkins first came to public notice on 'The Apprentice', but I'm relieved to tell you she signally failed on all the other questions in the Reality TV round.

All in all it was a super evening, even though little Scruffy was apparently a bit intimidated by my presence (see him there hiding under the table). 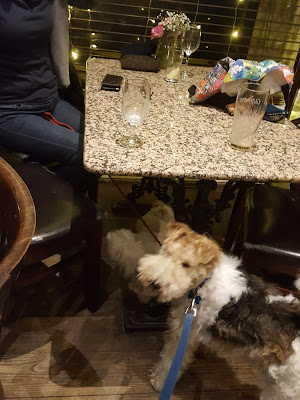 The Schnauzer attached to the adjacent team seemed a nice enough chap, and in the end I felt a bit sorry for him, having to put up with humans who weren't aware that Algeria is the African country with the biggest land area, and who didn't score a perfect ten in the spelling round... 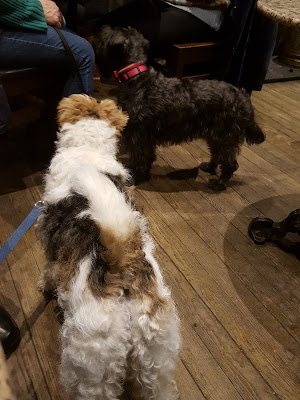