Gosh we had a super-exciting trip down to the the beach at Balmedie at the weekend.

Can you see something new on the horizon? 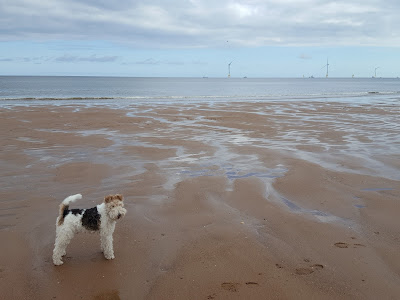 Perhaps you can see better in the picture below. Especially if you biggify it. 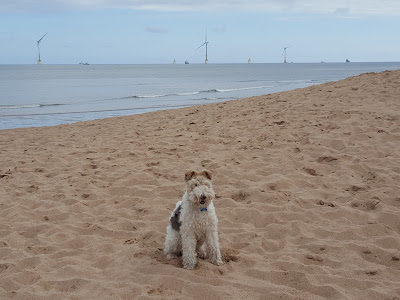 A cluster of huge wind turbines are being installed in Aberdeen Bay, a mile and a half out into the North Sea. Apparently they are among most powerful in the world, and this site is a test bed for new technology for offshore wind generation.

A good idea, don't you think? It is mighty windy in these parts, and surely the future lies in renewable energy. The world needs to learn to reduce its use of fossils fuels! And in Aberdeen in particular, the so-called Oil Capital of Europe, a new and more sustainable source of prosperity is sorely needed (or so the humans tell me).

Well you'll never believe this, but a certain very prominent person was totally opposed to the wind farm project. In fact he even tried to bully the authorities into refusing it permission. He said it would ruin the view from his golf course. (The one he bulldozed a protected conservation site to build).

But these golf links seem empty anyway, even on a nice spring Saturday afternoon. 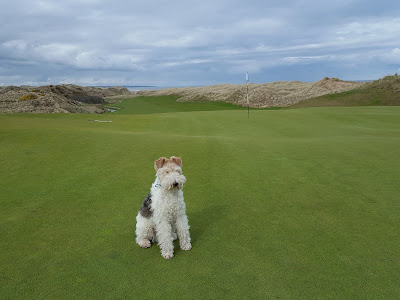 And really, the the view from the dunes behind the course is not, in my opinion, in any way spoiled. 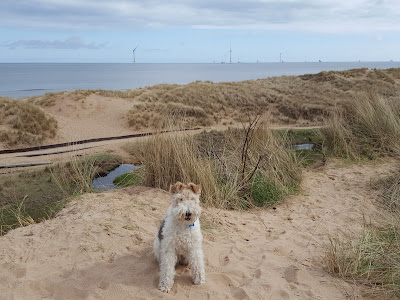 Long time readers of this blog will already have guessed that the owner of the (loss making) golf course is none other than a certain Donald J Trump. Perhaps some of you might even be interested in a few statistics, now that the Trump International course has been in operation for nearly six years.

Delivered (2018): Less than 100 (full time equivalent) jobs, 1 golf course (closed for 5 months of the year), a 19 room hotel in an existing building, a small clubhouse with restaurant and shop, no houses. Plus devastation of an SSSI (Site of Special Scientific Interest) by ploughing up the ecologically precious and unique sand dune habitat and drenching the land with chemicals...
Posted by WFT Nobby at 06:00