When you spy the snow plough coming towards you in Duthie Park... 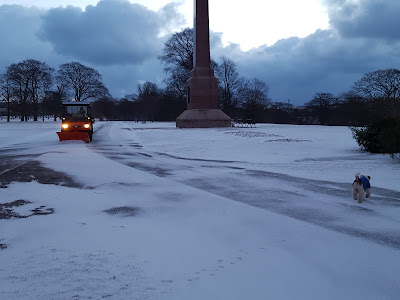 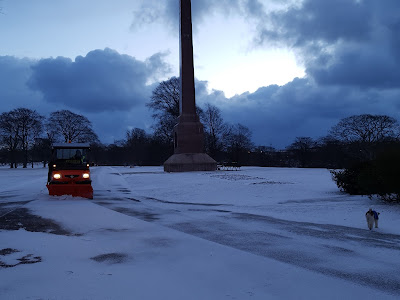 But in normal circumstances, I like to take my time over the early morning park circuit. Why rush when all that achieves is to bring forward the hour when your human abandons you to go to work?

And when, as yesterday, new snow has fallen, adding that touch of novelty to the otherwise familiar scene, there is all the more reason to linger.

I should also let you know that just at the moment I am trying, when out and about, to keep my distance from Gail. As would you if your owner had, on the basis of a cold late February blast from Siberia, excavated from the depths of her wardrobe the outsize padded jacket she was issued two decades ago for winter wear on a Northern North Sea oil platform... (Her theory that this jacket looks OK 'cos it's the same blue as my own natty winter coat only betrays her woeful lack of fashion sense. As if the notion of dressing up all matchy matchy with your dog somehow compensates for appearing in public like a heffalump who just ate all the pies.)

Tell me, are you ever embarrassed to be seen out with your human?
Posted by WFT Nobby at 06:00