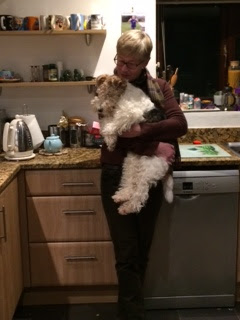 So my nice friends Yvonne and Neil invited me and Gail round to their house last night to watch the BBC's new TV series 'Civilisations'. As Gail was cuddling me in the kitchen, Yvonne mentioned that her younger son Aaron, who is studying at university in Edinburgh, had asked on his last visit home when they were going to get another dog.

Can you imagine how insulted I felt when I learned that what Aaron has in mind is not a medium sized and unfeasibly cute terrier, but what he calls a "real dog"? He has suggested maybe a rescue Rottweiler....

Meanwhile I am still having a wee bit of trouble with my paws - hence all the cuddles. I made it very slowly to the park this morning, but then had to be carried back. Gail says at least her arms are getting lots of exercise! 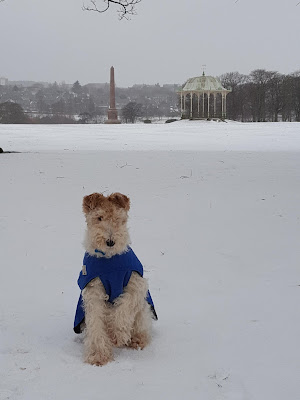 PS We are waiting until my paws are no longer too sore before trying out my newly purchased boots. Yes, we know, kind of a Catch 22 situation. ..
Posted by Bouncing Bertie at 13:29