Bertie allows Gail to show some holiday pictures (just this once)

So this post is going to be all about Gail's recent holiday in the USA, and is the result of a painstakingly negotiated settlement whereby photos involving bicycles are balanced by dog and other animal related images.

Well let's get the boring biking bit out out of the way for starters.
I had understood that Gail went to the USA to join her old friend Marse and a bunch of Marse's friends for an eight day bike ride around NW Montana.

Marse lives in Tacoma, WA. It seems she, Gail and the other riders drove all 450 miles from Tacoma  to the start point in St Regis, Montana on Tuesday September 5. And all the way back again the next day...  I, Bertie, think they were wimps to bottle out of the planned bicycle tour, just 'cos the route they'd planned, up to Glacier National Park, went right through the heart of an area of ferocious wildfires, and the whole state was blanketed in smoke so thick that people were being advised to staying indoors with windows closed and avoid all exertion...
Gail had been looking forward to seeing all the Montana wildlife, but had to make to with this moose by the lake at Coeur d'Alene, Idaho.
Even in Tacoma, the parked vehicles were covered in ash, reminding folk of the 1980 Mount St Helens eruption.

So the bike group re-thought their plans and organised rides around the South Puget Sound area and in Mount Rainier National Park, where the air was relatively clear. Gail says she thinks they did this mostly for her benefit, feeling bad that she had travelled such a long way with her bicycle, only to have the main event cancelled.

One day they started from the Cascade Bike Club HQ in Seattle (Gail was awestruck by the facilities), and toured the campus of 'U-Dub' (aka the University of Washington). 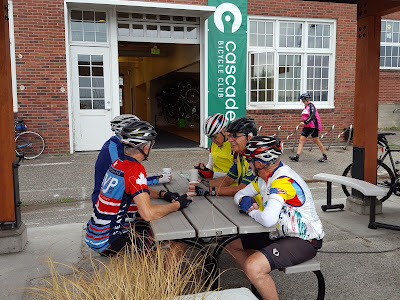 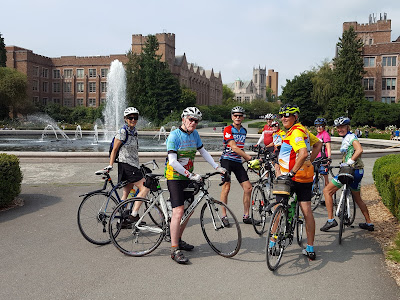 Another day they rode up to Black Diamond for a hearty lunch. 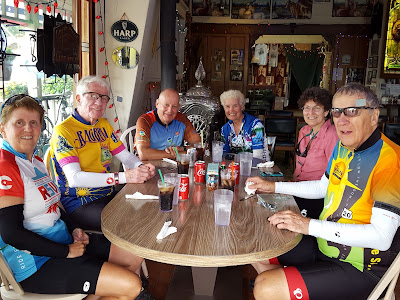 Then came a visit to Harstine Island, where the ride ended with a barbecue at cyclist Bill's gorgeous holiday home. 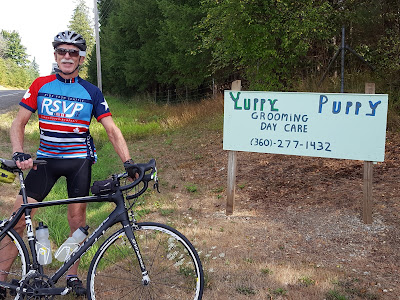 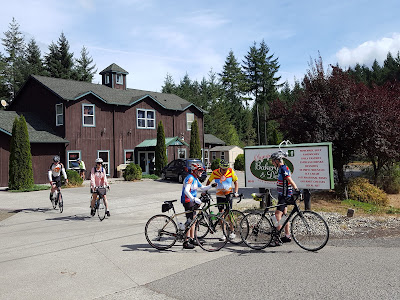 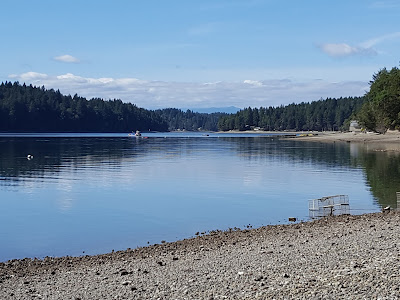 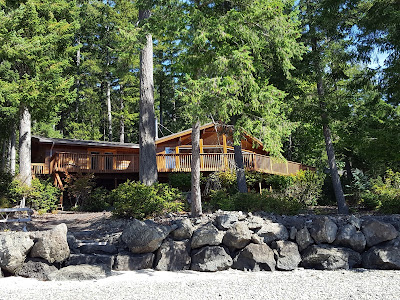 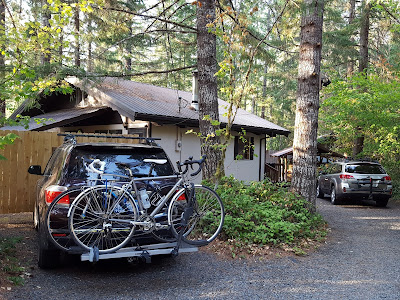 From the cabin, one day they rode up the 3600 ft ascent to the appropriately named Paradise. 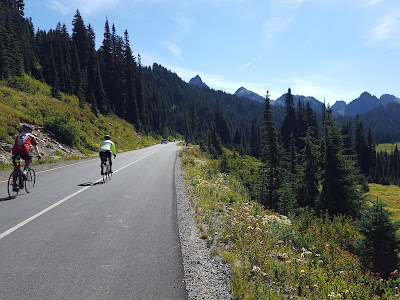 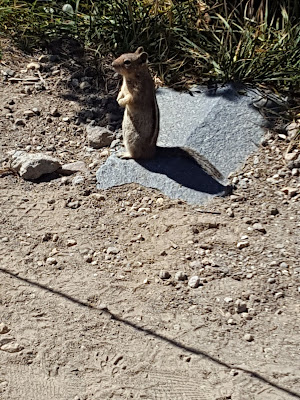 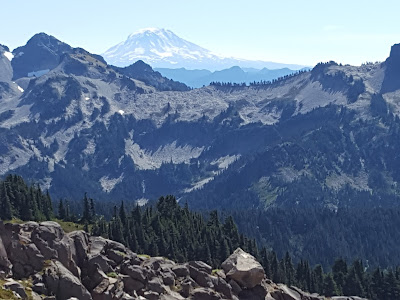 Later that same day, back at Jim and Lori's cabin, Gail was instructed in the essential American campfire ritual of making s'mores, the perfect follow-up to all that exertion on the bike. 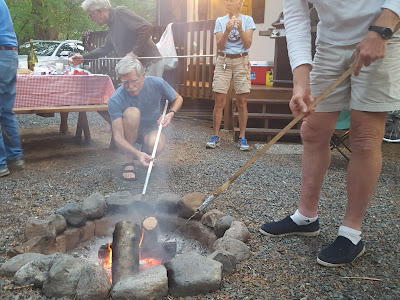 Another day they hiked up to High Rock lookout, where they disturbed the peace of a solitary young man and his handsome dog Champ. 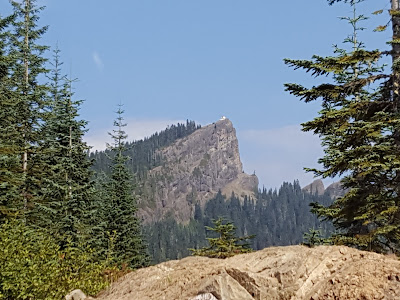 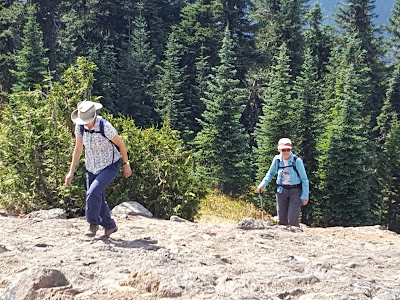 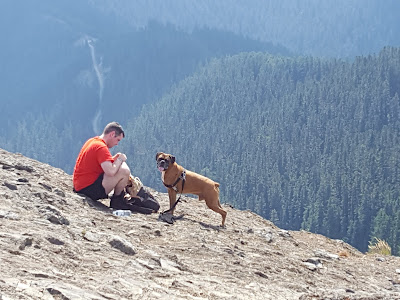 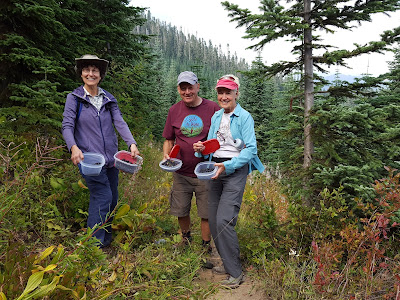 Returning to base in Tacoma, Marse had other things on her mind. It turns out that her dog Josh is something of an escapologist, and has recently taken to scaling her 4 ft high fence, and roaming the neighbourhood. I don't see why this is a problem, but for some reason Marse was intent on installing a DIY 'coyote roller'. This apparently involved fixing lengths of plastic tubing on top of the fence so that it rolls in such a way as to make it difficult for coyotes and/or dogs to clamber over. 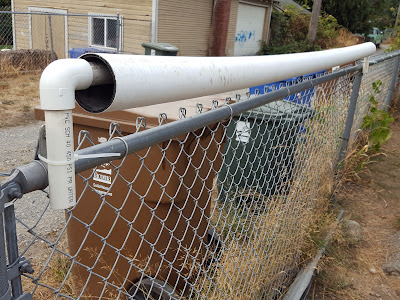 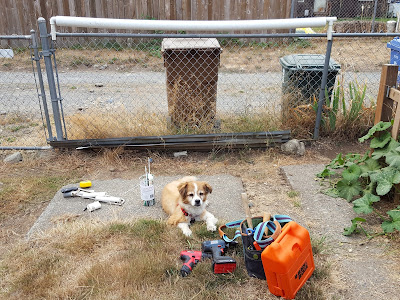 Oh, just to confuse you, the dog pictured about is not Josh, but seventeen year old Liddie, who also used to exhibit Houdini-like traits, but now is a sedate, if still charmingly cheeky, senior lady. 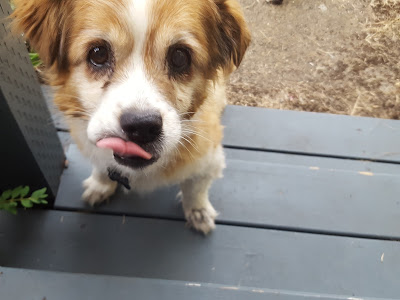 Finally, here is some bird-related artwork by the shore in Tacoma, plus one more photo of Josh and Liddie, as by my reckoning, there is still an imbalance in favour of bike photos on this blog post... 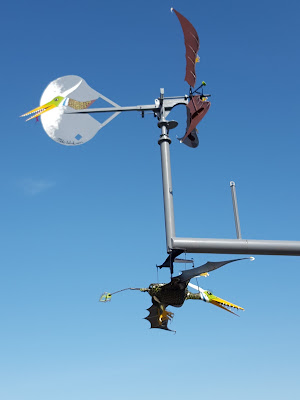 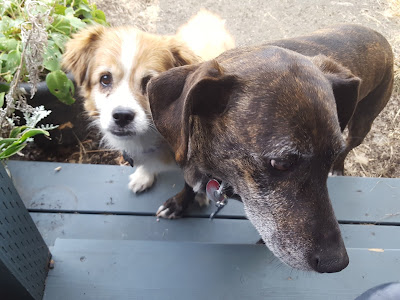 OK, finally, finally. Gail insists on posting this video she shot at a beach party one fine evening early in her visit, where Marse's nieces Marena and Soroa provided a memorable musical interlude. 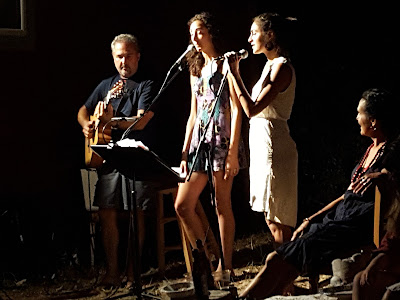 PS Next and future posts, I promise, will revert to being all about ME (Bertie).