The Tragic Tale of Tacoma Tubby 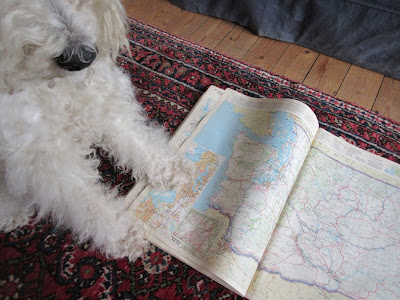 So it is true. My worst fears have been confirmed. I am going to be abandoned once again, while Gail flies off to the USA to stay with her friend Marse and, you've guessed it, do yet more cycling.

Last night she showed me the map of where Marse lives. It is a city called Tacoma, in Washington State.

Well, while Gail was at work, I snuck onto the internet and did some research on Tacoma. And you know what? I have decided I am quite happy to be staying at home.

It seems that Tacoma is not a good place to be a dog. Let me explain why I have come to this conclusion.

As (apparently) any engineering student knows, there was a famous disaster in Tacoma in 1940, when a suspension bridge across the Narrows collapsed in a most spectacular manner. You can watch it on YouTube. Fast forward to 2 minutes if you just want to see the break up.

What they don't tell you in this video is that the man who abandoned his car on the bridge, and walked to safety just moments before the structure was ripped apart by the high winds, LEFT HIS OWN DAUGHTER'S DOG INSIDE THE VEHICLE...

Yes, this misfortunate pup, a three legged and part-paralysed spaniel called Tubby, was still in the car as it plunged nearly two hundred feet into the water below. Tubby was the only victim of the disaster. His body was never recovered.

Really, how hard would it have been for the car owner to carry poor Tubby off the bridge too? After all, the man looks quite astonishingly relaxed in the video as he strolls along the rollicking roadway doesn't he?

So now you understand why I'm not petitioning for a passport this time.

PS from Gail: this blog will be quiet for while I am away and Bertie is at 'camp'. Normal service will resume in 2-3 weeks.

Posted by Bouncing Bertie at 05:30