Detecting a worrying pattern of behaviour

I don't know about you, but I watch my human very carefully indeed.

Any deviation from the normal pattern of behaviour, and I'm onto it like a labrador sniffing a treat-filled pocket from half a mile away.

All summer (well what passes for summer in these parts) Gail has been out on her bicycle every weekend for a few hours, and sometimes in the evening after work too. I'm not saying my walks have been neglected, but the snuggling on the couch together time has not been happening quite as much as I would like.

These last few weeks, the bicycle-related absences have been getting longer and I notice Gail has been returning with a face redder than the frame of her second favourite possession (after me). 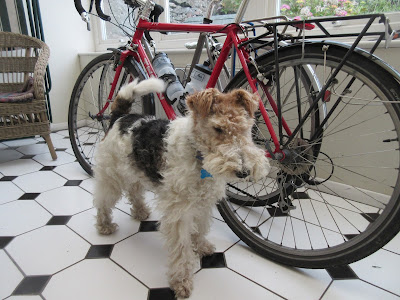 I note also there have been purchases of what I believe are cycling jerseys, short sleeved  and of material so thin that if you wore them in Aberdeen you would be hypothermic before you'd ridden to the other side of Duthie Park. Long disregarded sunglasses have been excavated from the back of the box room. High factor suncream has made an appearance on the kitchen table.

On the MacBook, Gail has bookmarked Google Earth and the other day I caught her looking at the profile of the 'Loup Loup Pass' on a website called Strava.com.

I think Gail imagines I haven't worked out that for me this betokens imminent abandonment and a spell in prison.

Humans can be so naive.

Posted by Bouncing Bertie at 08:20