The way Gail's been going on, anyone would think I have a reputation for behaving badly with tiny puppies…

"Er Bertie, you do have a reputation for behaving badly with the little pups. Remember how you bullied Daisy Dachshund at puppy class? And how you terrorised Bunty the Border terrier the first time she came round here when she was only three months old? As for the way you growled, really quite aggressively, at those two chihuahuas in the park the other day…."

Gail, please stop interrupting me when I am composing my blog post about my visit to your friend the Oil Man and his new Westie pup, nine week old Rosie.

Now as I was saying, it seems I have this reputation, so I want you to watch this video carefully (with the sound turned up) and count how many times words like "best behaviour", "good dog" and "impressed" are used with reference to myself. The voices are those of the Oil Man and Gail. Oh and cricket fans might pick up some background commentary from Test Match Special at the start.

For those readers who don't have time to watch a video, I have also posted some photos below. Although really, you should be rethinking your priorities in life shouldn't you, if you can't spare a mere ninety-five seconds to watch your favourite wire-haired fox terrier interacting with an indescribably cute Westie puppy? 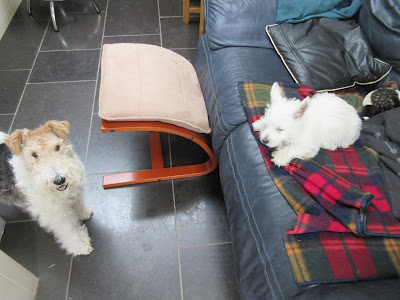 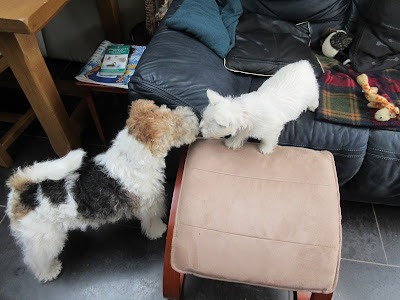 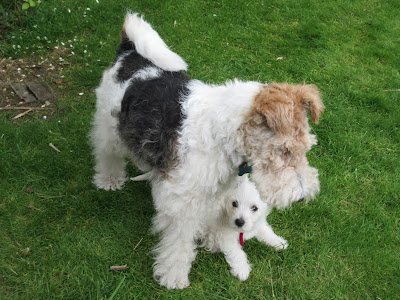 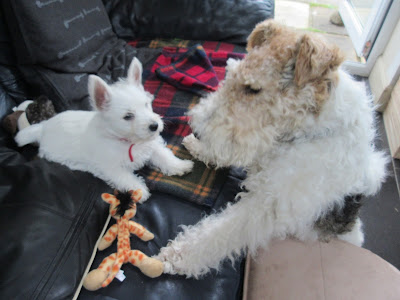 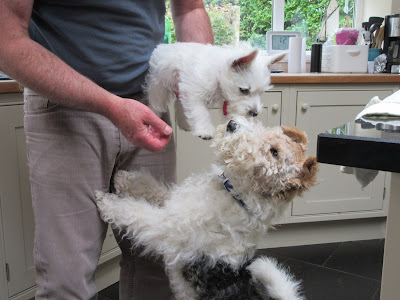 It was such fun meeting Rosie. I do hope I see lots more of her in the future. 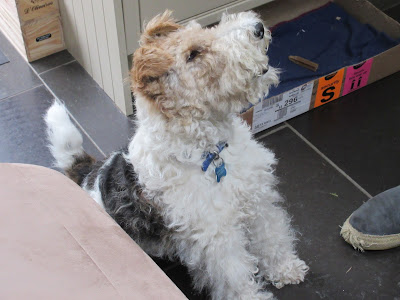 PS Gail, should we tell them about the emergency phone call from the Oil Man, half an hour before we were due there, asking if we had any newspaper?
Posted by Bouncing Bertie at 07:51