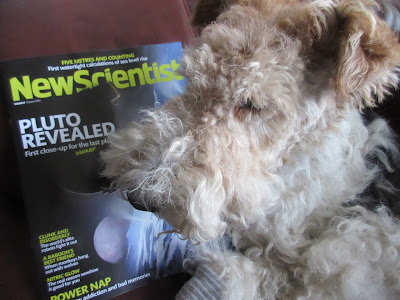 Attentive readers may have noticed that there have not been many Bouncing Bertie Boffin posts recently. In fact, some might have concluded I have rather lost interest in scientific matters. Please be reassured that this could not be further from the truth!

However, I will admit I have of late been been remiss in my duties as Scientific Advisor to Blogville, and a news story this week suggests a reason for this.

It is - I kid you not - because I have the misfortune to share my life with a female scientist (albeit one of a different species).

Yes really! It totally must be true because the very famous Nobel prize winner Tim Hunt has said as much. More precisely, this professor of biochemistry from University College London, one of our most elite institutions of Higher Education, opined a few days ago that male scientists should not work alongside female scientists because the latter are a distraction. To quote Prof Hunt verbatim: "Let me tell you about my trouble with girls … three things happen when they are in the lab …You fall in love with them, they fall in love with you and when you criticise them, they cry."

So that must be it. Therein lies my productivity gap. As for sure I love Gail and she loves me. And it is true too that she dislikes being criticised although I will concede her reaction does not normally involve tears, at least not that I have noticed.

Oh. And now Gail is criticising me for writing "utter twaddle".

She also tells me that female scientists are using 'Twitter' to take humorous revenge on the hapless Mr Hunt by posting distinctly unalluring photos of themselves conducting their lab or fieldwork under the hashtag #distractinglysexy.

Hmmm. So Gail has gone upstairs in search of a photo from one of her old albums, to contribute to the 'debate'.

Meanwhile, I shall try to focus my thoughts on some new science posts to sex up your summer...

Posted by Bouncing Bertie at 20:49