This is so humiliating.

Gail has told me I have to hand over my blog to her today, 'cos she wants to consult my readers on a 'behavioural question'. At first I thought fine, as she does exhibit several behaviours that could be considered questionable. But then it turns out that it is my behaviour that is at issue, and that treats will be withheld unless I comply with her 'request'.... 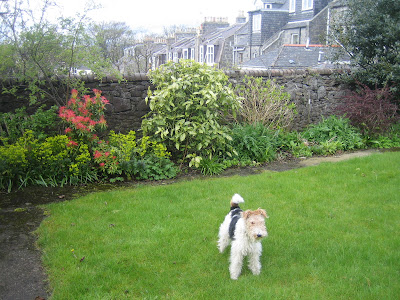 
Readers, I know that many of you are more experienced dog owners than I am, and I'm wondering if you have any helpful suggestions to deal with a specific, irritating trait of Bertie's that I have so far had no success in modifying.


Although wire-haired fox terriers are known as enthusiastic barkers, in most circumstances - in the house, at night, out on walks, in the car - Bertie is a relatively quiet dog. There is one notable exception to this. Whenever Bertie runs out unsupervised into my back garden, he barks his little head off. Often the barking is triggered by hearing another neighbourhood dog, but sometimes it seems he is trying to initiate the conversation. Once started, he will not stop unless I intervene. I have tried (for as long as I can stand) leaving him to wear himself out. I have tried telling him "NO BARKING" in my most severe voice. I have tried bringing him inside and 'sin binning' him in my downstairs toilet for quarter of an hour as soon as he starts up (a tactic which worked a treat with other annoying puppyish behaviours like persistent ankle chewing...) I have tried rushing out with a reward on the rare occasions when he goes into the garden and remains silent for a few minutes. But he will not learn.


I have a 'dog flap' in my back door. When my old Westie, Hamish, lived here, I would allow him access to the garden through the flap as and when he wished, which was especially useful if I was out for long periods. With all the barking, I don't feel I can use this system for Bertie, if I want to remain on good terms with my neighbours.


For the past two years, since Bertie arrived on the scene, I have been working mostly at home, but next week I start a new office-based job, initially two days a week, then, from August onwards, four days a week. Fortunately the main office is only a ten minute walk from home (or a five minute bike ride), so I shall often be able to nip back at lunchtime, and when this isn't possible I can arrange for Bertie to be taken out. But, obviously, it would be handy for me, and better for Bertie, if he could run in and out of the garden as he pleases while I am away at work.


One more perhaps relevant detail. My inner city garden is enclosed by 4ft granite wall, which Bertie cannot see over.


Anyway, I'd be delighted to hear any ideas on how I might persuade Bertie to break this barking habit and use the garden quietly. Bertie has never, to date, shown signs of separation anxieties, and overall seems a happy, confident wee chap, so I am optimistic that he will generally cope OK with not seeing quite so much of me.

Posted by Bouncing Bertie at 06:04