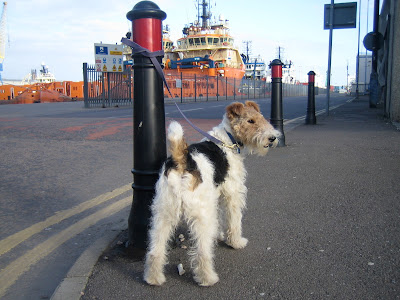 Did you know it's only a fifteen minute walk from our house to the Aberdeen harbour?  I haven't been down there before, 'cos there's a big road in the way, with scary noisy lorries. But I had an urge to go and have a nose around and Gail finally agreed that we could go.

OK, I'll be honest with you, it's been a long hard winter here in Scotland and I've been fantasizing about stowing away on one of the boats, so that I might perhaps visit some of my blogging friends in far off lands (as Gail is too mean to pay for the air fare). A good plan don't you think?

One problem with the harbour, I find out, is that it's hard to get close to the ships due to 'security'. The only car ferry that runs from Aberdeen was blocked off behind a big fence.  But anyway, as it goes to the Northern Isles (Orkney and Shetland) and I don't have any friends who live there, I didn't see any point in trying to sneak aboard. 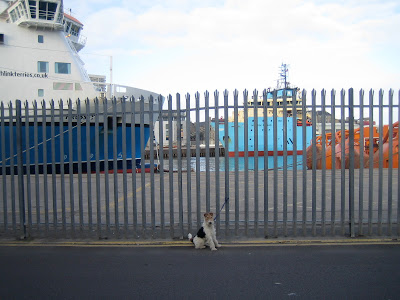 Further down the quay, we found an open gate and I ventured inside, reckoning that on a quiet Saturday afternoon no-one would object.  It would have been so easy to jump on to  this orange vessel, but Gail told me it was an oil field supply boat, and that she doesn't think any of my pals live aboard a North Sea platform either. 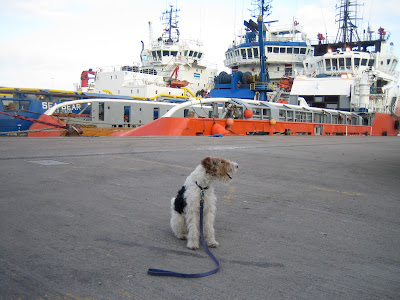 In fact I was disappointed to discover that most of the boats in the harbour were something to do with the North Sea oil industry. (I had been picturing myself on a luxury liner...) 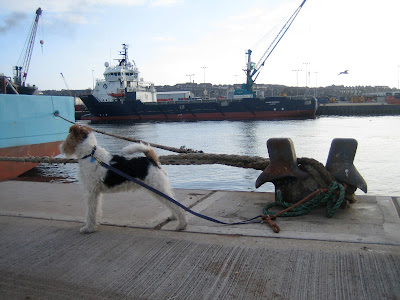 We did see a vessel which appeared to be shipping timber. Perhaps this one was headed somewhere exotic?  But it was so huge, I couldn't figure a way to bounce on board. 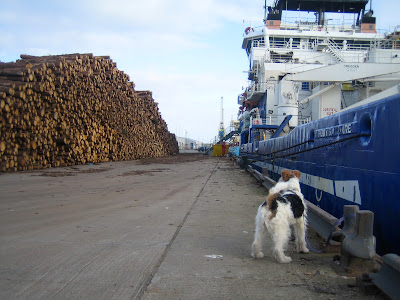 On the opposite side, I spotted some small fishing boats, but Gail said that fishermen were having a hard time enough as it is at the moment, what with fish stocks being so low, and all the European quotas to deal with, and I probably wouldn't be a welcome addition to the crew. 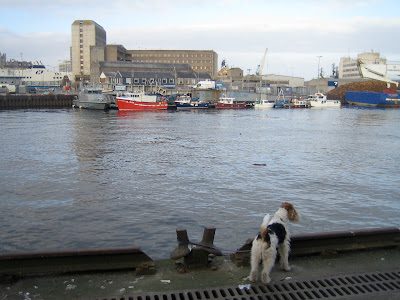 Finally we came across these funny orange capsule things.  Well I can tell you, when I learned that anyone who goes out to the North Sea has to do special survival training in case the ship or oil rig sinks, and that you might end up bobbing around in 30 ft waves in one of these little craft, I decided once and for all to stay true to my terrier instincts and keep to dry land. 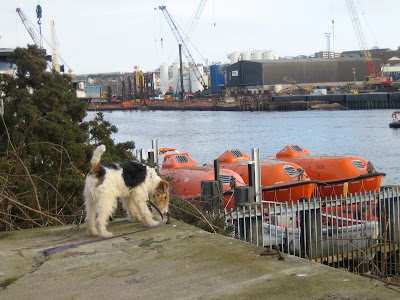 Sorry, bloggie friends across the water, but as the great Rabbie Burns said: 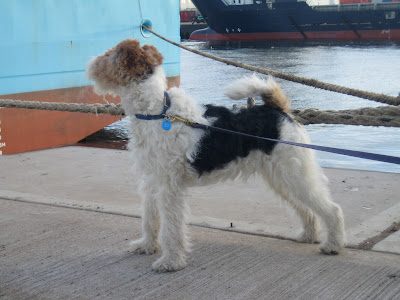 We'll have to rely on communicating in cyberspace!
Posted by WFT Nobby at 06:21