My name is NOT 'Big Grey Cloud' 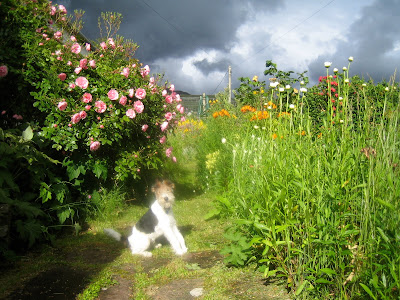 We went over to the cottage on Loch Torridon last weekend.
From the garden, Gail kept pointing up in a north-easterly direction and saying 'see Bertie, that's what you're named after'.
I was most confused. I had understood that for my 'official name', Gail had chosen a rather grand Scottish mountain. But where she was pointing, all I could see was a great big dark cloud. And lots of rain coming out of it.
How very disappointing. One is led to believe that one has been registered with the Kennel Club as 'Granddach Beinn Alligin' (Beinn Alligin is one of the Torridon Moutain group, and the words mean 'Jewelled Mountain' in English). A name that one could be proud of indeed.
And then one finds out that one is actually called 'Big Wet Cloud' or something.
I think Gail caught my look of utter disenchantment. 'No, no Bertie you've got it all wrong, just wait a while and you'll see'.
Well as we know, waiting patiently is not my forte. So I wandered round the garden chewing a few plants, then went indoors and had a nibble at the bristly doormat.
By the time I came back outside the wind had shifted the clouds and we could see a big round lump behind the cottage. That was Beinn Alligin, apparently. 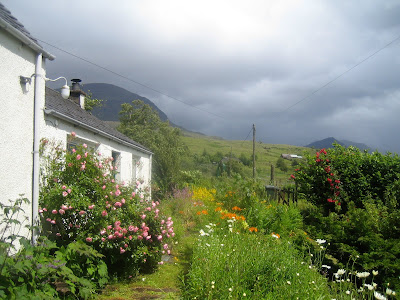 Later, when the clouds had lifted further, we drove round to the other side of Loch Torridon, and Gail made me pose 'nicely' so that she could take this picture of the mountain from a better angle. 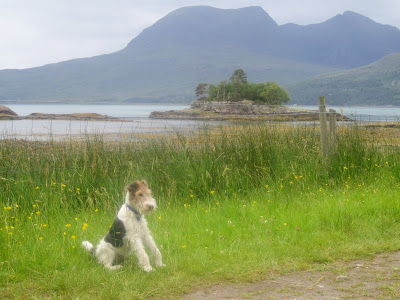 Next year, when I am bigger and stronger, we are going to climb it!
[Readers of Gail's 'Between Dogs' blog will know that for everyday purposes I was named Bertie after Bertie Wooster, 'cos P.G. Wodehouse makes Gail smile and I am supposed to do the same. Sometimes she calls me 'Bertie WFTer' or 'Bertie Woofter'. It can be something of a trial when your human likes stupid puns....]
Oh, and while we are one the subject of my weekend in Torridon, I want to show you some more things, to make up for our last visit, when Gail forgot the camera.
I am told that the newly opened shop and cafe in Torridon village is lovely, and that you must visit it if you find yourself in that part of the world. I was made to wait outside, but several friendly people stopped by to give me a pat so that was OK. 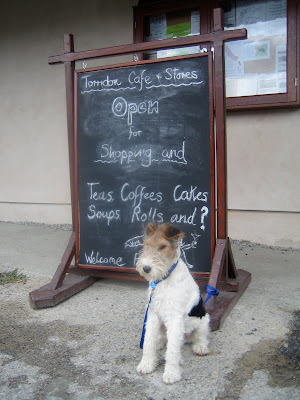 Back at the cottage, I discovered a very comfy sofa, and I am allowed up there if I do not nip at Gail's hands too much when she is sitting besides me trying to read. (Why do humans read, by the way, it seems so boring when they could be playing with their dogs...) 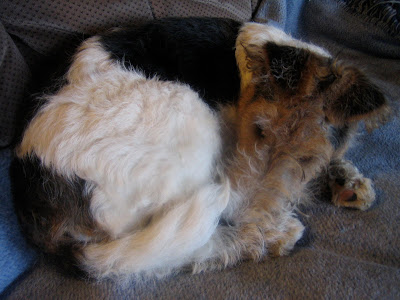 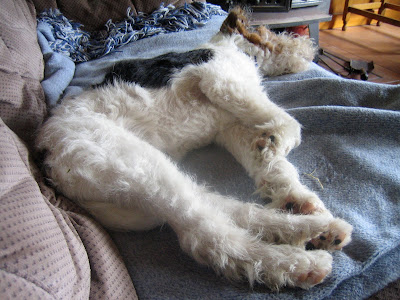 Outside, Gail showed me a very special stone. The ashes from her old dog Hamish the Westie are buried under there. 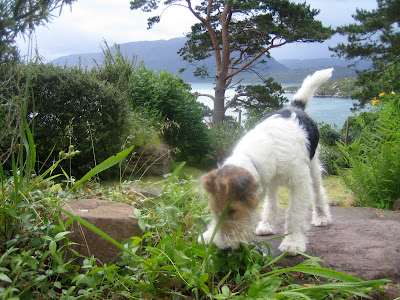 I noticed Gail getting a wee bit tearful when she was telling me about this, so I bounced up and down a few times and tugged at the bottom of her shirt and tried my best to make her smile again.
It seemed to work.
Posted by WFT Nobby at 21:27