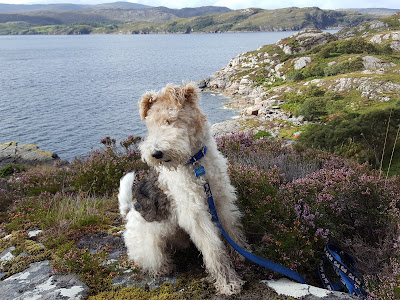 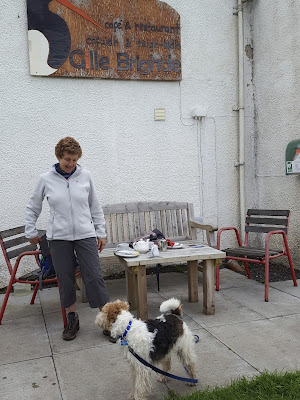 Yvonne: "That was utterly terrifying. I am a nervous wreck. Bertie, can't you control your owner? She is a madwoman. Every muscle in my body was shaking as she forced me to scramble down those wet slippery rocks in that vertical gully back there. I had no idea what I was letting myself in for. I'm telling you, I won't make that mistake again. I can't believe she dragged me down that cliff. I thought I was going to die. I'm a North London Jew and for us a walk is what you do from the car park to John Lewis* at Brent Cross Shopping Centre... I don't think I can move another inch now, I am in such pain. Bertie, tell your owner I'll stay here at the café and have another smoked salmon sandwich, and she can walk back and get the car and give me a lift home."

Bertie: "And you're complaining? Think how it was for me! I was looking forward to bouncing down the gully, maybe exploring the odd side route, doing my own thing, taking advantage of the fact that Gail would be concentrating on keeping her footing. Maybe I'd even get the chance to run off after a deer, or one of those feral goats that hang out in these parts. But no soon as we reached the top of the steep bit than Gail - the big spoilsport -  clamped on my lead, saying she wasn't going to have me running off putting us all in danger by getting myself stuck and needing to be rescued from somewhere even more inaccessible and precipitous. No matter how hard I pulled on the lead as we descended, Gail just wouldn't let go, and I'm telling you, there was a fair bit of what my American friends call HBO language being uttered along the way. It was all very stressful indeed. Really I think you had it quite easy..." 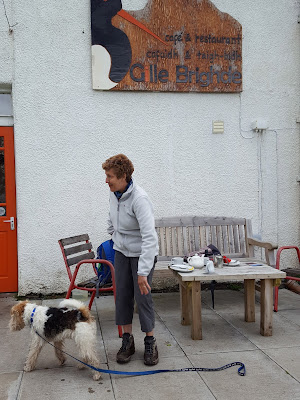 *Note for non-British readers: 'John Lewis' is a well known UK department store traditionally favoured by the comfortably off middle classes.
Posted by WFT Nobby at 06:00