Did you see Arty's Special Blogville Announcement this week that he and Dory, along with Murphy and Stanley, are organising a Mini BAR retreat in Oregon this August?

I wasn't able to go to the BAR (Blogville Awesome Retreat) in Indiana last year, 'cos I live on the wrong side of the Pond.

The idea behind a Mini BAR is that small groups of Blogville citizens can organise local meet ups, to make the travelling easier.

Of course, to your geologically minded Bouncing Boffin, alternative solutions sprang to mind.

Oh but what a shame it is that we are not living around 270 million years ago, when all the continents - yes, even Australia - coalesced into one huge land mass called Pangaea and one could have travelled by automobile or railway train (had those forms of transport then been invented) from Scotland to Sydney via Seattle without once having one to dip one's paws in the briny or, horror of horrors, board an airplane. 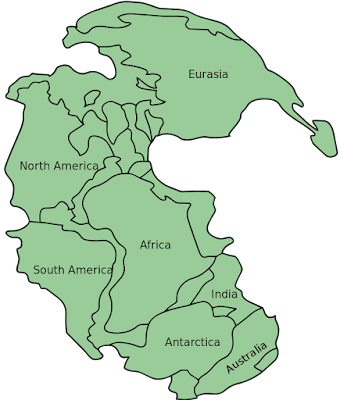 It is of course perfectly possible that, at some point in the next few hundred million years, the world's tectonic plates might realign themselves such that our continents all come together again. (Just think how many walls Mr Trump would then have to build...)

However, the truth of the matter is, at least as far as Europe and North America are concerned, the direction of travel is not just now in our favour, with Iceland pulling itself apart at a rate of centimeters per year for the foreseeable future.

Reluctantly I have to conclude that the prospect of seeing my dear non-European friends in the furs is remote indeed.

Anyone for a Mini BAR in Scotland?

We can guarantee a warm welcome at Aberdeen railway station.